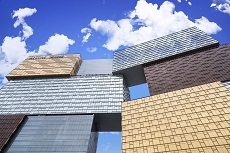 MGM COTAI has been named World’s Best New Skyscraper 2018 at the Emporis Skyscraper Award, one of the most renowned architecture prize for skyscrapers. Being the first building in Macau to receive this accolade, MGM COTAI, designed by Kohn Pedersen Fox Associates, stood out in almost 500 new skyscrapers around the world with its overall innovative and spectacular design. 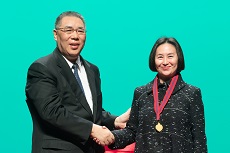 Ms. Pansy Ho received Medal of Merit-Tourism from MSAR: Ms. Pansy Ho, Co-Chairperson and Executive Director of MGM China Holdings Limited, has been awarded Medal of Merit – Tourism from the MSAR Government for her contribution to Macau's tourism industry. This honor further affirms Ms. Ho's ongoing passion for strengthening Macau's role in global tourism. Ms. Ho was among 44 individuals and organizations recognized for their outstanding achievement and contribution. 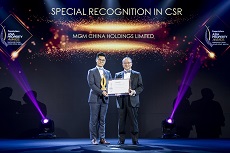 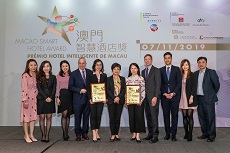 MGM MACAU and MGM COTAI were recognized as Elite Smart Hotels at the “2019 Macao Smart Hotel Award”, organized for the first time by Macao Post and Telecommunications Bureau (CTT). Taking home two out of the six “Elite Smart Hotel Awards”, the highest accolade of the contest, the achievement was an endorsement of our belief in “people-oriented technology”. It was also a testament to our aspiration of delivering the best experience to guests and team members with innovative technologies, which has been part of our endeavor to make Macau a Smart city as well as the World Center of Tourism and Leisure. 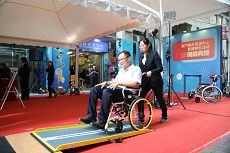 MGM sponsored Macau’s first Assistive Technology Resources Center: Operated by the General Union of Neighbor Association of Macao, sponsored by MGM and supported by IAS, Macau’s first Assistive Technology Resources Center opened to the public on November 26. The center features the display of barrier-free home and promotional materials of auxiliary tools, offering the needy and caregivers an easy access to auxiliary tools in order to improve their quality of life. Through the provision of professional advice and assessment service, together with a better deployment of auxiliary tools, the community will become more acquainted with related resources. 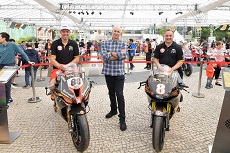 MGM’s Stellar Lineup for the 2019 Macau Grand Prix: Supporting the Grand Prix since 2008, MGM ventured into Formula 3 this year and sponsored young racer Sophia Floersh. Last year Sophia suffered a setback when a horrifying accident happened to her; our sponsorship helped her get back to the Guia Circuit. Sophia has demonstrated her perseverance and strong desire to become the first female Formula One world champion, which perfectly matches MGM’s philosophy of supporting young talent to pursue their dreams.

MGM also sponsored the MGM by Bathams Team’s Michael Rutter and Peter Hickman, as well as Penz 13 Racing Ream Team’s Davey Todd, Erno Kostano and Dan Kruger. In addition, MGM invited a group of athletes with intellectual disabilities to meet with bikers and go into the paddock. They were given an opportunity to help design helmets, leathers and bikes, which were seen on the track at the Macau Motorcycle Grand Prix. 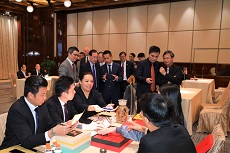 MGM collaborated with Macao Chamber of Commerce (MCC) to launch a new round of SME Business Matching Session on November 13, drawing nearly 200 SMEs to participate. During the event, MGM signed a Memorandum of Understanding with PFM Macau on the launch of a young entrepreneur mentorship program. The Company also signed the Sichuan Product Strategy Procurement Agreements with three local SMEs. The initiatives reaffirmed MGM’s commitment to continuously procuring from SMEs and embodied its dedication to assisting Micro SMEs, Made in Macau and Young Entrepreneurs.

Promoting integrity awareness with CCAC: MGM Academy has invited CCAC, the Commission Against Corruption of Macau, to organize a seminar for enhancing our management members' understanding of the law “Prevention and Suppression of Bribery in the Private Sector”. Speakers from CCAC explained the roles and responsibilities of CCAC along with the background information of the law. They also introduced different scenarios and put on mini-movies to elaborate on case studies. This seminar was also supported by our Legal department, with over 130 management members participating.

The “Seminar on Lifestyle and Consumer Behavior in Mainland China” was held by MGM Academy in collaboration with the Sun Yat-Sen University. Professor Anthony Wong from Sun Yat-Sen University, as well as his academic team, were invited to share the different aspects of lifestyle and consumer behavior in mainland China with over 80 MGM team members. They spoke on a wide range of topics, including city development, educational and cultural differences, how daily necessity would drive people’s spending behavior; and the emerging trends of consumer and marketing models. 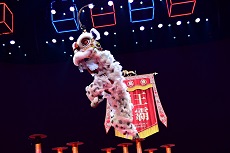 MGM Lion Dance Championship – Macau International Invitational 2019 took place at MGM Theater on November 23 and 24, drawing 27 champion lion dance teams from 11 regions to fiercely compete for the throne. Chan Siew Kee, also known as “King of Drum” for being the grandmaster of lion dance, was invited to perform at the opening ceremony. He led a group of his grand-disciples from around the globe to present an awe-inspiring traditional Shaping-Heshan style Chinese drum performance. The spectacular highlighted the inheritance of this Chinese traditional sport. 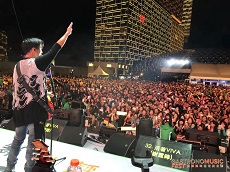 MGM and Chef Nic co-created the first-ever Gastronomusic Fest at MGM COTAI on November 30 and December 1. This one-of-a-kind “fork n’ roll” festival encompassed music, gourmet foods and great entertainment, which offered the audience a great chance to sample a slice of Macau as the “Creative City of Gastronomy”. Leading a stellar roster of performers and master chefs, the talented singer-chef Nicholas Tse put on both hats to conjure up a multisensory extravaganza featuring high-octane music gigs and a sumptuous feast. 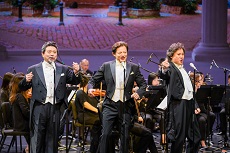 China’s Three Tenors Concert in Macau was held at MGM Theater on November 19 as a celebratory performance for the Double Jubilation. Hosted by the Beijing-Macau Economic and Cultural Exchange Promotion Association, sponsored by Macau Foundation and supported by MGM, this music extravaganza featured the thrilling performance of the three renowned Chinese tenors, namely Dai Yuqiang, Warren Mok, and Wei Song. By presenting a national class performance for Macau people, the concert was expected to promote Chinese art and heritage, build a cohesive community; and enhance the relationship between Beijing and Macau.