Reinforcing Macao’s designation as an UNESCO Creative City of Gastronomy: On January 21, MGM was invited by MGTO to “International Gastronomy Forum Macao 2019” to discuss about innovative cooking and F&B management philosophy, together with the UNESCO (United Nations Educational, Scientific, and Cultural Organization) representatives, as well as renowned culinary and gastronomy elites, in order to enhance Macau’s gastronomic development. 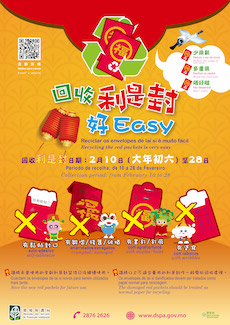 Lai See Recycling: This Chinese New Year, MGM is once again supporting the “Recycling the Red Packets is Very Easy” campaign initiated by the Macau Environment Protection Bureau, as part of our environmental commitments to reduce waste.

From February 11 to 28, re-usable red packet envelopes are collected at both MGM MACAU and MGM COTAI. 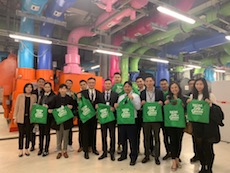 YMCC visiting MGM for Green: On January 25, MGM welcomed a group of 21 members from The Youth Committee of Macau Chamber of Commerce for a Green tour. The tour consisted of a guided site walk around MGM COTAI property providing an insight into the recycling operations, efficient energy using, green guest room features, as well as having an overview of other sustainability programs in MGM. In line with the vision of MGM sustainability, MGM has been working closely with local associations to cultivate the environmentally friendly culture and explore new sustainability opportunities. 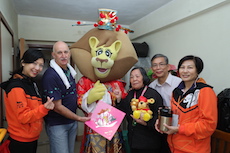 Spring cleaning for senior citizens: Spring clean before CNY is a significant Chinese tradition that symbolizes “usher out the old, greet the new”. MGM organized the 8th “Spring Clean for Love” for senior citizens from Caritas Macau’s Centro de Dia Brilho da Vida. On January 29, 180 MGM volunteers worked together to spread the warmth, chatting and catching up with the seniors, cleaning and decorating the homes with MGM designed Fai Chuns (red banners) at nearly 230 households at the Fai Chi Kei housing unit for senior citizens. This year, MGM also consulted the Chinese Medicine Association of Macau and prepared a tailor-made, seasonally appropriate Chinese soups for all the seniors. 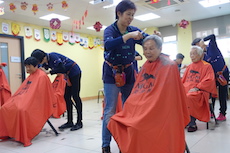 CNY visit to Fu Hong’s new residential care center: Prior to CNY, MGM Golden Lion Volunteer Team visited Long Cheng Center - the first residential care center for intellectual challenges members of Fu Hong Society of Macau, to chat and play games with the center members while giving them the Chinese New Year wishes. The newly established center provides a better living to its members through various technologies, including the Inclusive Community Online Program, which aims to unitize the video call function at the mobile devices and connects the center’s members and Volunteer Team members. MGM Volunteer Team taught the members living in the center how to use the video call function during the visit and hope to communicate more effectively with the members in the future. 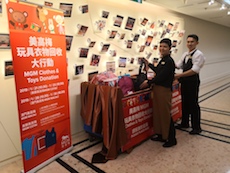 Congratulations to Leong Ieng Wai for being awarded Certificate of Merit! In January, the local artist Mr. Leong Ieng Wai (known as “0.38”), an autistic youth under Fuhong Society, was awarded the Certificate of Merit by Macao SAR Government! This is a recognition of his efforts in raising public awareness on the artistic talent of people with intellectual disability. Over the years, MGM has invited “0.38” to create our employee handbook and a collection of corporate souvenir notepads. A mural depicting MGM COTAI exterior by “0.38” is also on display at MGM executive office. 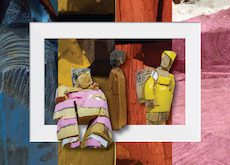 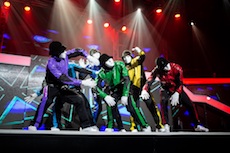 
Hip-Hop Dance Crew Jabbawockeez: From March 2 to 31, MGM is bringing Macau locals and tourists the world-famous Hip-Hop dance crew Jabbawockeez’s first-ever Macau residency show, JABBAWOCKEEZ - true to yourself. With their core belief in dance being a universal language, the crew aims to showcase their talent and skills strictly through dance, hiding their faces behind the mask to break through the barriers of race, gender and age. Known for their signature plain white masks and synchronized dancing, the Jabbawockeez will fly over from their current residency performing at MGM Grand Las Vegas, to give the audience an up-close-and-personal performance with MGM Theater’s state-of-the-art audio, visual and lighting technology.