Energy management seminar:On December 27, MGM’s Vice President of Facilities Management, Peter Chan, was invited as a speaker for the “Energy Saving and Emission Reduction: A Management System Approach” seminar jointly organized by Macau Productivity and Technology Transfer Centre as well as Office for the Development of the Energy Sector, to share MGM’s project milestones over the years with the industry.

As Macau’s first integrated resort operator to receive ISO 50001 Energy Management System certification for MGM MACAU property and the China Green Building Design Label Three-Star Certification for MGM COTAI property, MGM has been recognized for excellence in the continuous improvement in environmental sustainability. In 2017, the Company reduced energy consumption by 34%, compared to its 2008 baseline, through various energy-saving efforts. Since 2013, MGM has decreased greenhouse gas emissions, energy consumption and water consumption by 16.4%, 16.7% and 10.9% respectively. Caridade Social Award 2018: On December 18, MGM’s Volunteer Haircut Team was awarded the “Caridade Social” which is a recognition of its unwavering efforts in providing complimentary haircuts to local senior citizens on a monthly basis. To date, the number of beneficiaries has grown to over 2,000, with a positive community feedback. The Award was co-organized by the Youth Committee of the Macao Chamber of Commerce and Associação de Jovens Empresários Chineses de Macau, aiming to encourage more enterprises particularly in industrial and commercial sector to give back to the local community. 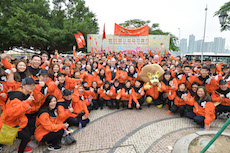 Walk for a Million 2018: On December 9, MGM participated in the 35th “Walk for a Million”, the Macau major annual charity event run by Readers of Macao Daily News Charity Fund. 900 of MGM team members and their family members joined together to participate in this great event, with the Company donating MOP600,000 in support. 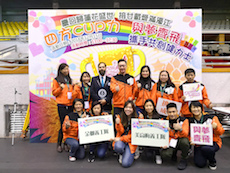 Breaking Guinness world record: On December 15, the MGM Volunteer Team, together with over 300 intellectually challenged members, participated in a Guinness world record-breaking event organized by Fuhong Society of Macau, using 22,650 cups to make a mosaic picture of about 116 square meters with the theme of “Celebrating the 20th Anniversary of Macao’s Handover to China”. Restoring the natural greenery: On December 27, MGM was invited by IAM to take part in a tree planting event at the green area of Long Chao Kok and help restore the natural beauty of Macau damaged by Tyhpoon Mangkhut.

Celebrating the 11th anniversary: MGM invited its team members to join a carnival-themed party to enjoy the special menu served up by senior management members, along with lucky-draws, performances and other fun games and photo booth.

Talent development and human capital: MGM is widely recognized for its employee endeavors. This month, MGM was invited by HRoot to participate in the 2018 Macao China International Human Capital Forum. MGM’s Vice President of Learning & Talent Management, Francis Tan, shared our practices in the field of human resource management and talent development with over 600 representatives from different government parties, corporates and organizations from China, Hong Kong and Macau.