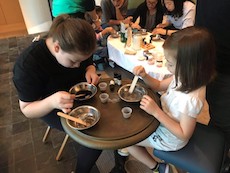 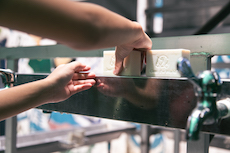 ‘Towards Zero Waste’ campaign: From November 19-25, MGM held a weeklong campaign to encourage team members to consume less, reuse, and repurpose to embrace a ‘zero waste’ lifestyle. More than 2000 participated in the series of awareness-raising activities, including our first ‘Towards Zero Waste’ market in collaboration with ‘Fuhong Society of Macau’, ‘1-Minute Project’ and ‘Stuffbox Natural Friendly Store’. The market also featured a ‘give and take’ booth where team members exchanged their pre-loved items for something they like, as well as a ‘DIY corner’ manned by MGM Green Team members where they shared how to make ‘garbage enzyme’ multi-purpose cleaner, reusable heat packs and exchanged DIY tips. In addition, team members were given a food waste tour with Chefs and stewarding team from commissary kitchen to the food composter to learn about how food scraps were transformed into compost and was then used to fertilize our gardens. Last but not least, team members and their family created soap bars and body scrub using all natural ingredients, turning waste items into skin care products.


We look forward to more innovative re-purposing of waste in 2019!

Soap recycling milestone: Since 2014, MGM Macau has been a partner of Clean the World Asia. To date, over 10 tons of soap bars have been collected and hygienically recycled into as good as new bars and given, together with hygiene education, to the low-income communities in Macau and across Asia. 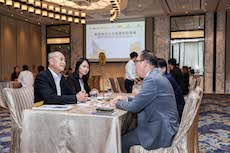 Create Business Opportunities for Local SMEs: On November 7, MGM welcomed over 110 SMEs to the MGM SME Business Matching Session, co-hosted by Macao Chamber of Commerce and supported by Macao Economic Bureau, Macao Trade and Investment Promotion Institute, and the Macau Productivity and Technology Transfer Centre. At the event, focus was placed on cultivating three key local SME segments: “Micro SMEs”, “Made in Macau” and “Young Entrepreneurs”, aiming to create more business opportunities for them and to facilitate their business growth. 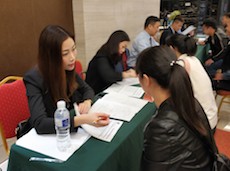 Visiting Guizhou to support poverty alleviation: Invited by Associação de Agências de Emprego de Capital da China (Macau), MGM organized a recruitment fair with the aim of alleviating poverty and encouraging economic development in the Guizhou province. Our representatives interviewed over 100 candidates, about one-third of which were shortlisted for the positions of security officer, food & beverage attendant and housekeeping attendant. In addition, MGM held a seminar for more than 300 students from three local colleges. 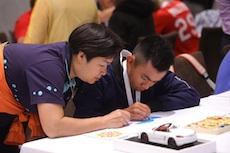 Promote social inclusion: For the fifth consecutive year, MGM invited athletes with intellectual challenges to have a memorable encounter with the Grand Prix Motorcycle Team sponsored by MGM. The program began with an art workshop, where about 100 athletes with intellectual challenges collectively created colorful designs for a BMW motorbike, race suits and a wall banner for the Motorcycle Team at the paddock. They also had the opportunities to meet with the legendary riders, to visit the motorcycle team in the paddock and to enjoy the races from the grandstand at the race day.

Caritas Macau Charity Bazaar: On November 3 and 4, MGM proudly supported the 49th Caritas Charity Bazaar with five exciting yet meaningful family games that had everybody played all day long. MGM volunteers and management members gathered at the Nam Van Nautical Center, to help the crowd to try the games at our booths, which also helped to raise money for the community of Macau. Engaging the local SME committee: On October 29 and November 19, respectively, MGM COTAI welcomed 17 members of the Macau Union Suppliers Association and 37 members of Industrial Association of Macau to the Back-of-house to discuss how to strengthen the cooperation in developing a sustainable supply chain, in the hope of building a platform for the development of local SMEs.

Lion Dance, art and community: On November 10 and 11, MGM invited about 300 community members to participate in the Lionhead painting master workshop and the “MGM Lion Dance Championship – Macau International Invitational 2018”, including members and parents from the Macau Special Olympics, Fuhong Society of Macau, and Association of Parents of the People with Intellectual Disabilities of Macau. MGM also welcomed the elderlies from the General Union of Neighborhood Associations of Macau to the Championship. In addition, students majoring in Art from Macau University of Science and Technology, members of design club from Pui Ching Middle School and students from ILHA Verde Primary School also joined the workshop to complete their very own lion head masterpieces to bring home.

Charitable contributions: On November 8, MGM donated MOP500,000 to Macau Tung Sin Tong Charitable Society, to support its work to provide health and educational services to those in need in Macau.

At the roadshows organized at both MGM MACAU and COTAI, more than 1,300 team members played interactive games and quizzes, and chatted with counsellors to understand more about Responsible Gambling and the avenues to seek information and assistance. 200 team members also participated in two workshops to learn about gambling probability, the risks of borrowing money, credit card overdrafts and how to be aware and prevent gambling disorder.

A homemade short film on 'Responsible Gambling' was also launched during the campaign. The film, starring our own team members promotes Responsible Gambling in a lighthearted manner and through sharing on social media platform, we hope to promote the message to a wider audience.

Weaving the aesthetics of Chinese Intangible Cultural Heritage: On November 17, MGM organized an art symposium on intangible cultural heritage at Asia’s first dynamic theater – MGM Theater at COTAI. Four experts across various arts and cultural disciplines came together to spark in-depth discussion around the topics of how to live Chinese heritage with modern creativity and innovation and pass it on to next generations. The symposium attracted over 500 participants from local and regional art and culture communities.

Until the end of 2018, the “Explore the Beauty of Chinese Embroidery” program is taking place at MGM COTAI, displaying a series of intangible cultural heritage artisanship as shown in the highly acclaimed Chinese drama “Story of Yanxi Palace”, including Chinese traditional embroidery, Kunqu opera and Ronghua.