The inaugural MGM Macau Eco TrailHiker: On November 4, for the first time as title sponsor, the MGM Macau Eco Trailhiker was held with over 2,000 eager hikers and runners taking part in both the 10km and 30km races. As Macau’s largest group hiking event, it is not only a chance to enjoy being outdoors and having fun, but also has charity at its heart, with the proceeds of MOP400,000 going to two local charities: the Sisters of the Good Shepherd and the Rotary Club.

Congratulations to all the participants and a big thank you to all the MGM volunteers for making this a memorable and special day! 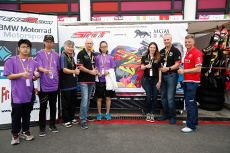 Supporting social inclusion through art and sport: On November 7, MGM held an art workshop to design a large banner for the Macau Grand Prix paddock. Accompanied by the motorcycle team, a group of 12 athletes from the Macau Special Olympics collectively created colorful designs for the wall banner. On November 13, a group of world-renowned Grand Prix motorcycle racers paid a visit to the Macau Special Olympics center to meet the athletes. 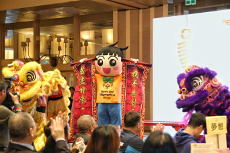 Annual Waste Audit: Year to date, MGM has reduced waste generation by 15% and increased recycling levels 7-fold through an intensive recycling program. To further identify opportunities for waste reduction and recycling, throughout November, the Stewarding and Sustainability teams worked together to conduct a company-wide waste audit of over 6,600kg from offices, rooms and F&B. Stay tuned for more waste reduction initiatives! 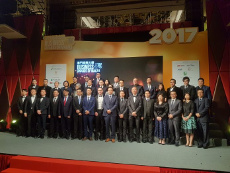 Awards all around: MGM was recognized in November with several awards which are due to the hard work and dedication of our team.

On November 15, MGM was proud to be announced as a top 15 global finalist at the Stop Slavery Award presented by Thomson Reuters Foundation, the philanthropic arm of the world’s biggest news and information provider. The selection identifies MGM for its best practices and continued leadership in combating human trafficking across the globe.

And finally on November 24, MGM MACAU was recognized as one of the My Favorite Hotels and Resorts at U Magazine Travel Awards.

Presenting ‘Learn & Play! teamLab Future Park’ at MGM MACAU: MGM is proud to have launched the innovative and eye-opening art exhibit at the MGM Art Space - “Learn & Play! teamLab Future Park”. The teamLab Future Park project explores the theme of co-creative learning through digital technology and brings four inspiring digital installations to Macau including Graffiti Nature - Mountains and Valleys, Sketch Town (which transforms into Sketch Christmas during December 1 - 26), Sketch Town Papercraft, and Light Ball Orchestra. The exhibition will be open to the public until February 28, 2018.