The countdown is on! On October 21, 00:01am, MGM announced the official 100-day countdown towards the opening of MGM COTAI. We are also proud to have MGM COTAI awarded as the Most Anticipated Hotel by the Guangzhou Daily. Celebrating the importance of family: On October 6, MGM held an employee fair with fun games and prizes promoting the importance of family time and connecting with our loved ones with the theme being “it takes love to build a home”. We also premiered a special short film created in-house by our team and starring our own team members and their children called “Home is where the Love is” which promotes MGM’s onsite counselling facilities. These activities are part of our dedicated Employee Assistance Program – “Enrich Your Life”.

Inclusion in the workplace: On October 3, the Learning & Development team collaborated with the Macau Deaf Association and Fu Hong Society to offer two tailored training courses, including Sign Language and effective communication with individuals with impaired hearing. Through a series of fun games and role play, the 40 training participants from Housekeeping, Floral, F&B and Human Resources came away with a greater understanding on how to create an inclusive working environment. The MGM Junior Lion Dance program has trained over 200 lion dancers since its launch in 2015, with the dancers having been invited to perform at many important public events. During October MGM’s Junior Lion Dancers wowed the crowds at two separate events including a public performance organized by the Wushu General Association of Macau at Tap Seac Square on October 7, as well as a festival organized by the Cultural Affairs Bureau on October 28. Hospitality round-table on modern slavery: On October 17, MGM presented on its approach to addressing modern slavery to other hospitality companies based in Hong Kong and Macau at the Modern Slavery and the Hospitality Industry Forum organized by the Mekong Club and the International Tourism Partnership organization. Showcasing occupational health & safety programs: On October 31, professionals from the local hospitality and catering industry were invited to visit MGM MACAU for a presentation and tour to learn about MGM’s occupational safety and health initiatives, an event organized by Labour Affairs Bureau.

Music instruments donation: MGM donated music instruments and equipment including drums, bass, keyboards, and speakers, to the students of the School of Nations to help nurture local passion for the creative arts. 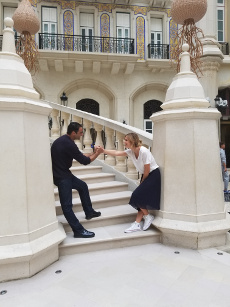